Taste : The delivery, though controlled at first, is massive! Then more like con-fusion as that smoke on the nose turns into warming, full blown peat, but it far from gets its own way as a vague sherry trifle note (curious, seeing how there are no sherry butts involved) - the custard presumably is oaky vanilla - hammers home that barley - fruitiness to make for a bit of a free-for-all; but for extra food measure the flavours develop into a really intense chocolate fudge middle which absolute resonates through the palate;

Finish : A slight struggle here as the mouthfeel gets a bit puffy here with the dry peat and oak; enough molassed sweetness to see the malt through to a satisfying end, though. Above all the spices, rather than lying down and accepting their fate, rise up and usher this extraordinary whisky to its exit; 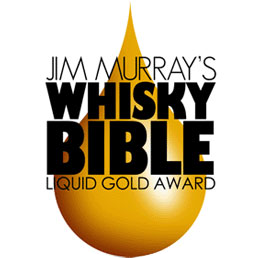 Grand Master of World Whisky at the Spirits Business Awards in London, 2011